What time is it? Not late for my meeting. Yet.

Where am I? The jewel of the Baltic.

Where am I actually supposed to be? Not by this flower shop, that’s for certain.

Who could not love Saint Petersburg?

I knew I was going to like it the moment we arrived at Pulkovo International Airport (ПУЛКОВО) and the driver met us as promised. “Dosvedanya,” I said confidently. (I later realised it meant “Goodbye”.) I raised my eyebrows and waved my arm in the internationally acknowledged mime for “Is the car very far away?” I envisaged the endless car parks of Heathrow. The already baffled driver looked even more baffled, opened the airport door and said, “Прямо здесь.” And there the car was. Right outside the door.

Car? Just outside the door

The world’s northernmost city is both beautiful and bold, with pleasing parks, enchanting cathedrals along the canals, and enough art to keep you occupied for several years. It was designed by Peter the Great. Here the Russian Revolution began, when the Bolsheviks, led by Lenin, stormed the Winter Palace in 1917. Here hundreds of thousands of the city’s people (when the city was called Leningrad) died in the siege that ran from 1941 to 1944.

What a place to be.

Navigating the city on foot was sometimes a challenge. English is rarely used or spoken. Generally, I managed to find our way around via street signs using a limited knowledge of the Cyrillic alphabet. I had once inadvertently acquired a smattering of Ancient Greek without any thought that it might one day be practical in the modern world. I could guide us up and down Nevsky Prospect well enough.

Unfortunately, my passing acquaintance with Greek drama left me better equipped to spot references to warring Persians and avenging Furies, few of which are found on the streets of the Venice of the North (the city has many titles).

Sophocles was particularly remiss in not including the words for “restaurant”, “post office” or “statue of Lenin” when he was busy writing the histories of Oedipus.

Once, the taxi driver deposited us outside what he thought was the right building for our meeting and drove away. We then had a series of calls with the people we were supposed to be meeting, who were trying to work out where we actually where. “We’re by a busy road,” I said. “It looks like there’s a flower shop. I think it’s called Tulips from the Trojan Wars. Does that narrow it down?” We are glad to have been a source of entertainment to passers-by, who shook their heads, smiling, when I showed them the address on my piece of paper.

I also managed to get us lost between the hotel and the Church on The Spilled Blood, misreading a sign for the Mikhailovsky Garden as the Mariinsky Ballet. (“They both begin with M!”) However, the resulting impromptu visit to the Field of Mars produced the intriguing spectacle of a wedding party paying tribute to those who died during the Russian Revolution. Not something you see every day. 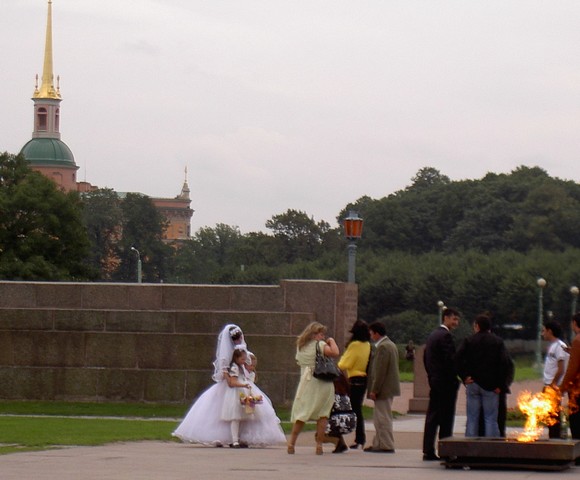 Bride burning bouquet in the Field of Mars?

The only way to recover was to repair the hotel bar where every Pushkin Punch arrived with a beribboned verse from the Romantic poet. You always had to have one more (poem).

Who could not love Saint Petersburg?

Summary: Sometimes, getting lost in the days before Google Maps was worth the detour. Thanks, Sophocles.

Views so far from